Hello!
I am back with Part 2 of my Travel Diary from my recent Euro trip and conference! This time I am talking and sharing about my travels to Nice, in the South of France, after the conference was over!
It has been on my list for some time to travel to the south of France. I had read article after article, photo after photo, about how wonderful and beautiful the beaches are in south France. I had always wanted to go to Nice/Monaco/St Tropez, but never did I think I would go so soon!
After my second year of grad school, I told myself when I graduate, I’m going to go on a euro trip for 6 weeks, and Nice, France was one of my top destinations. When I had the opportunity to go to Portugal for the conference, I said why not extend my trip and check out another city! I knew I wanted to go to France, but I wasn’t sure if I should go by myself or not. I ended up convincing my friend to meet me there, and so off I went, to Nice for 3 days before my friend was to meet up with me, and we were going to then drive down the coast to St. Tropez and then take a train to Paris! It was like a dream come true!
One of the fun parts of being in France after the conference in June was that the Euro 2016 Football (Soccer) cup was going on, hosted IN France! It was soo much fun and the atmosphere was electrifying! There were fan zones set up in each city, and I found the fan zones when I was exploring around! The fan zone was basically a place to go watch the games on a super large screen, with lots of screaming fans, and there were little kiosks for food and beer – lots of entertainment. It would get really hot during the day, so at times it was scorching hot so I made sure to keep hydrated, and I had so much fun, even though I was alone. I was in Nice during the games that were hosted in Nice, in particular England was playing Iceland, and all of the English fans came to Nice just for the game, so the atmosphere was very cool. Unfortunately England lost, but it was still fun to be around! 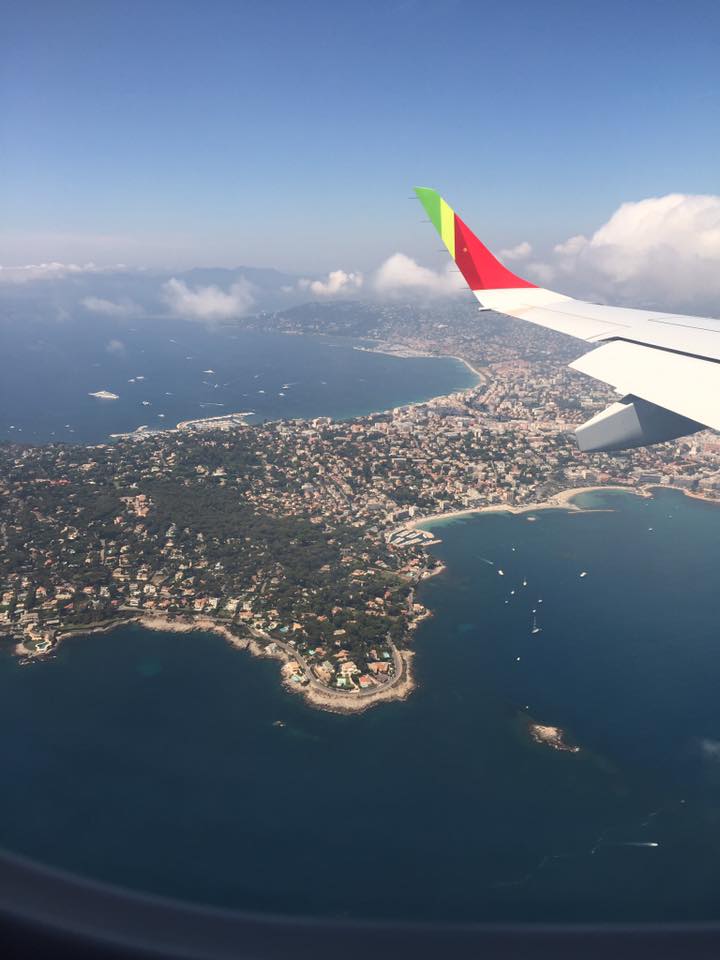 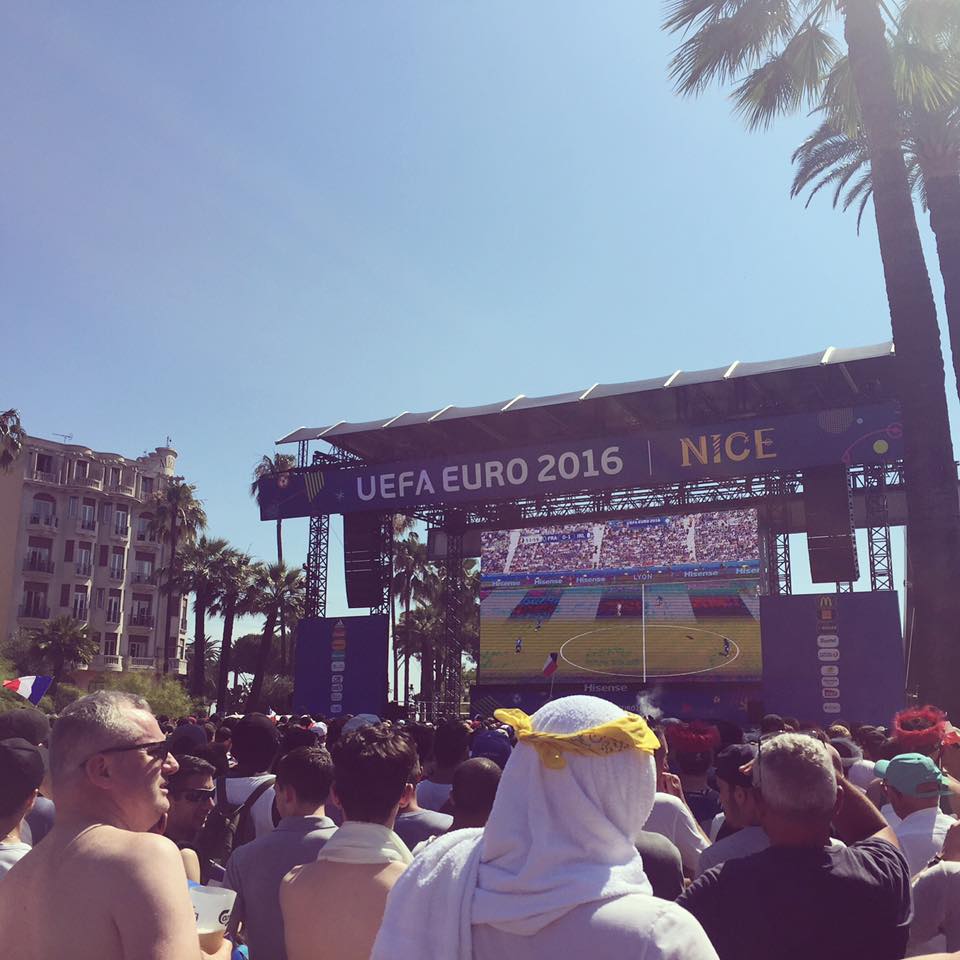 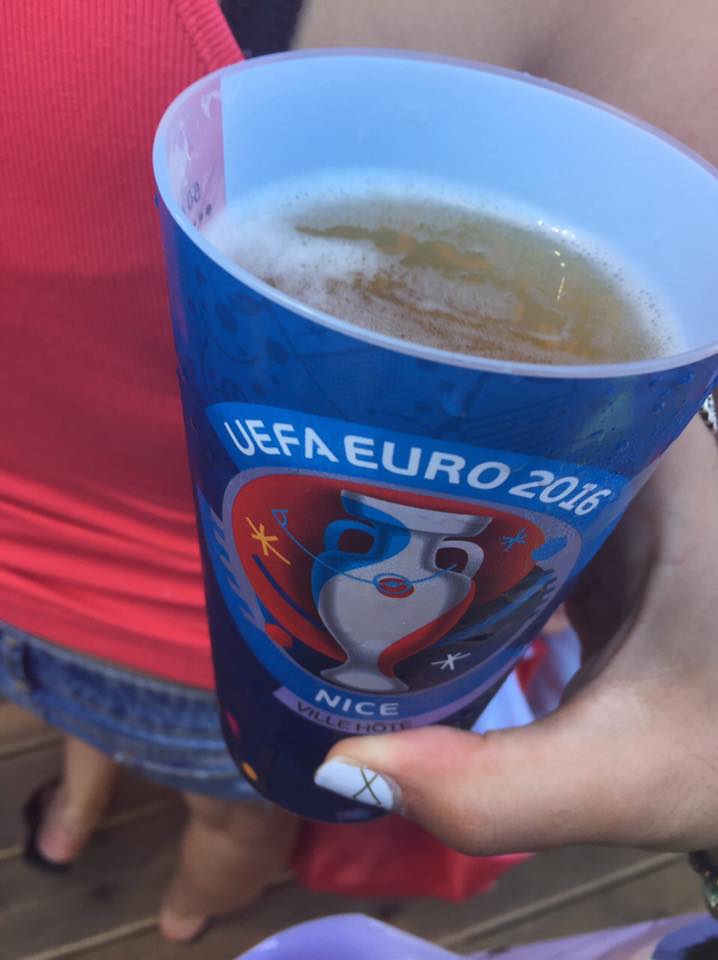 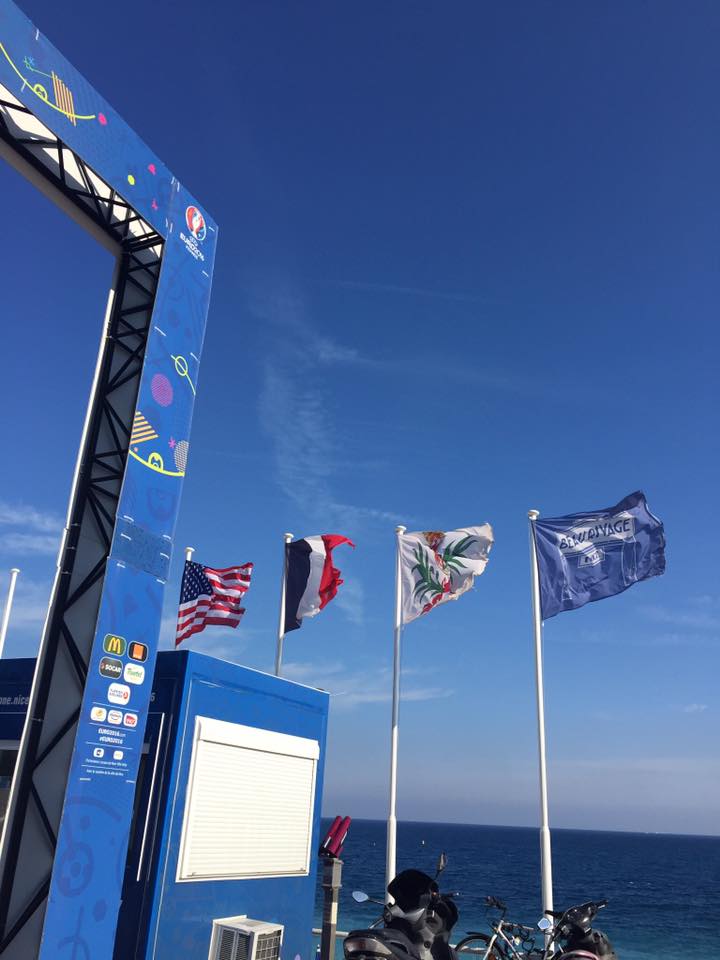 At the times I wasn’t watching soccer, I spent a lot of time on the beach and walking around, and I got a really nice tan! It was funny because the beaches in Nice are all pebble, which I didn’t mind other than the pebbles/rocks got super hot in the sun! But It was such a surreal experience, I remember just standing looking at the water on the beach and I was just SO happy! I made myself a goal, I told myself I want to go to the south of France, I want to go to Nice, and I made it happen. I took an opportunity to go to a conference for my career and used it to make a dream come true! If you never dream, you can’t accomplish what you are capable of! 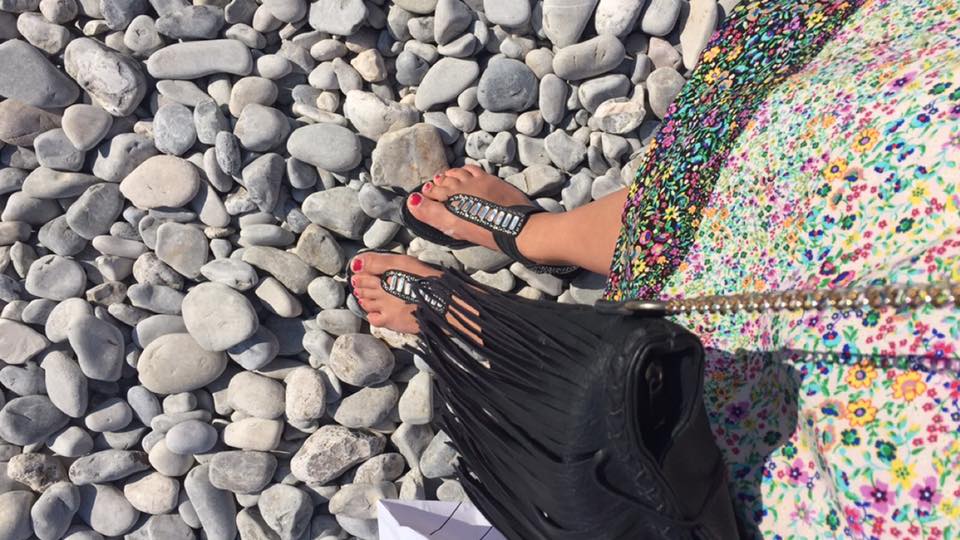 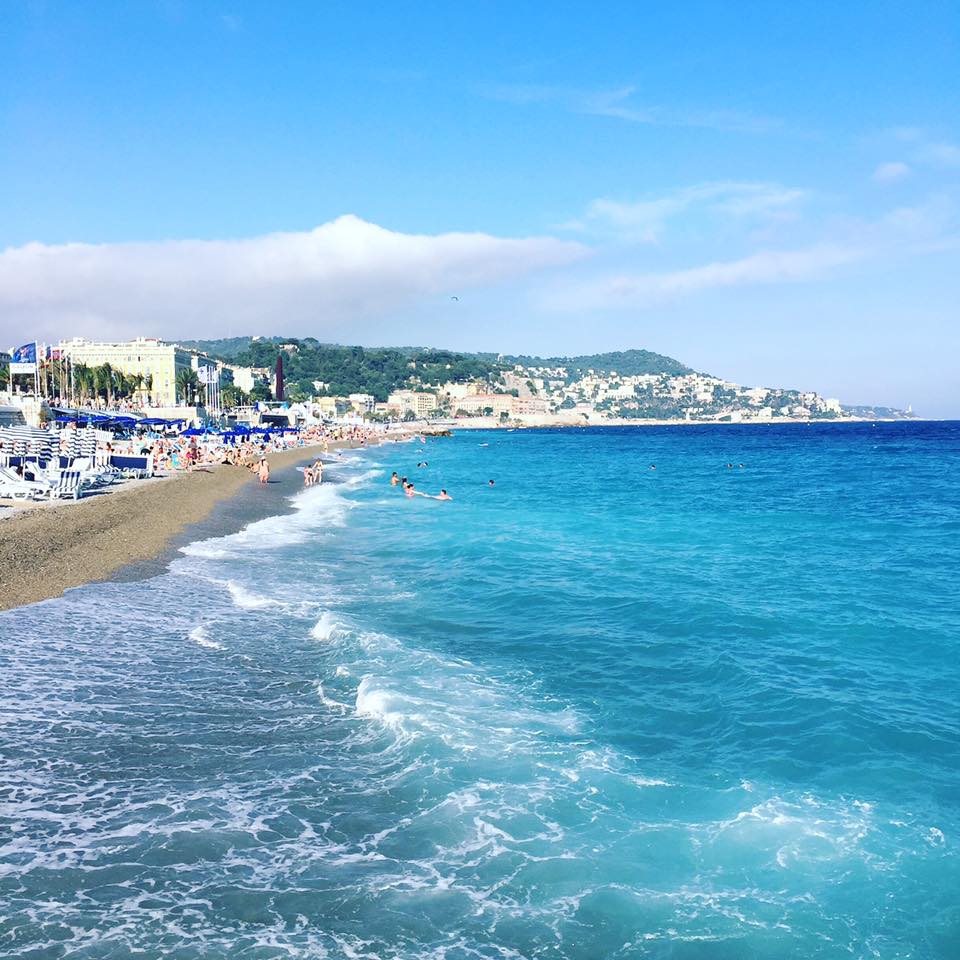 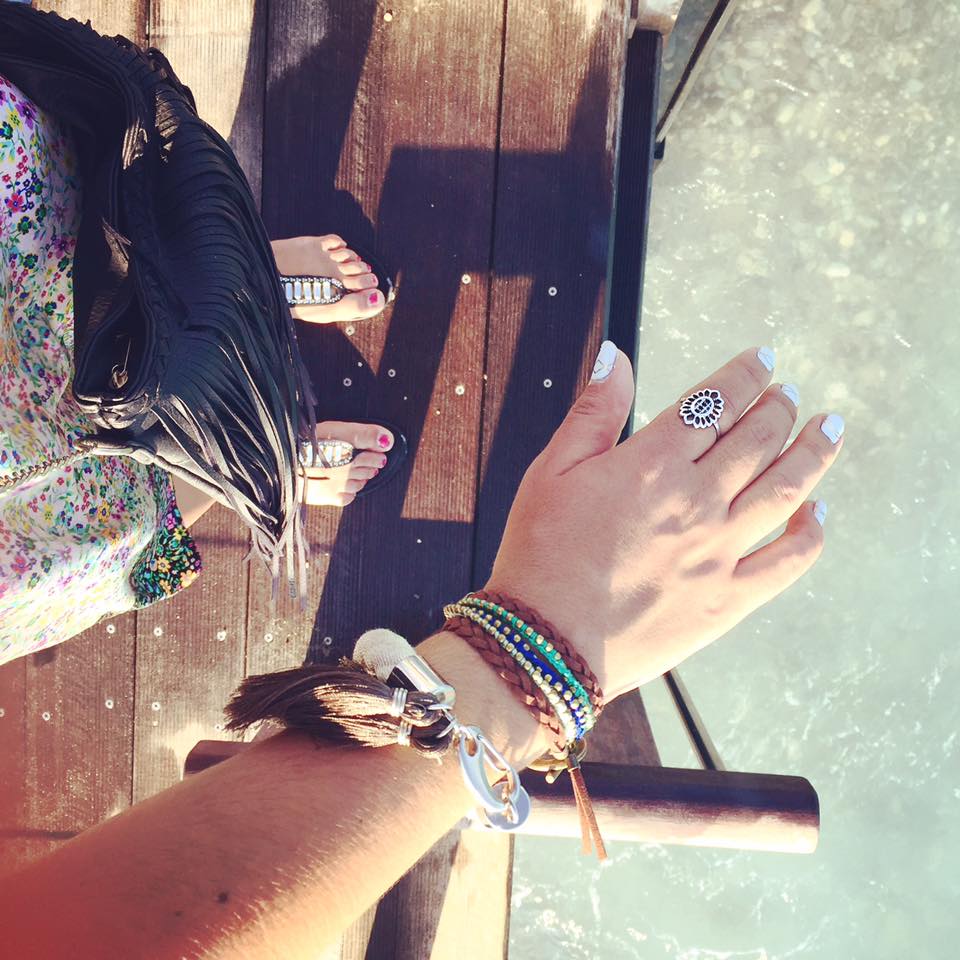 I bought the skirt and bracelet in Portugal! I am in love with these pieces! The tassel bracelet is from Yayoi found at Boyajian Trend Gallery. 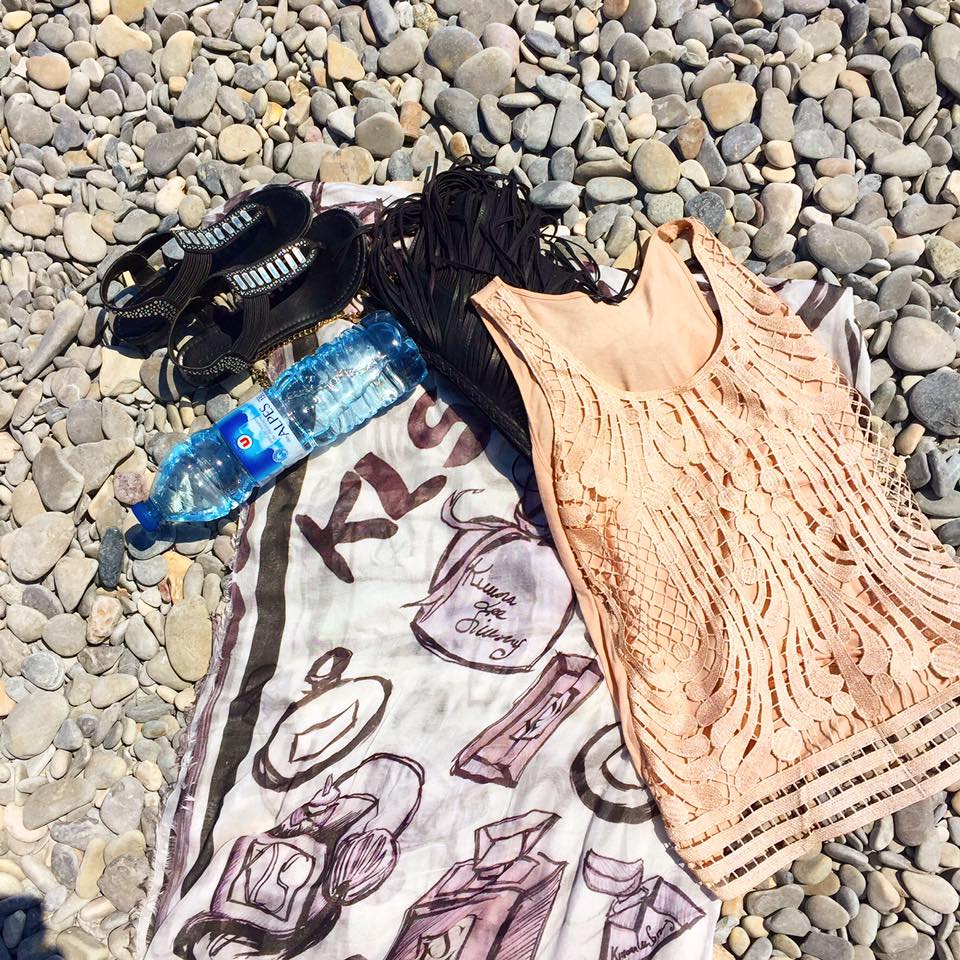 My makeshift beach towel – a Kimora Lee Simmons Scarf that I got at an event I went to, I wore it daily as an accessory and a way to cover up from the sun most of the time – I didn’t want to risk getting sun burned.  My top is from Express, and my Sandals are Steve Madden. And of course, staying hydrated with a bottle of water! Staying hydrated was so important to me, especially during travel! 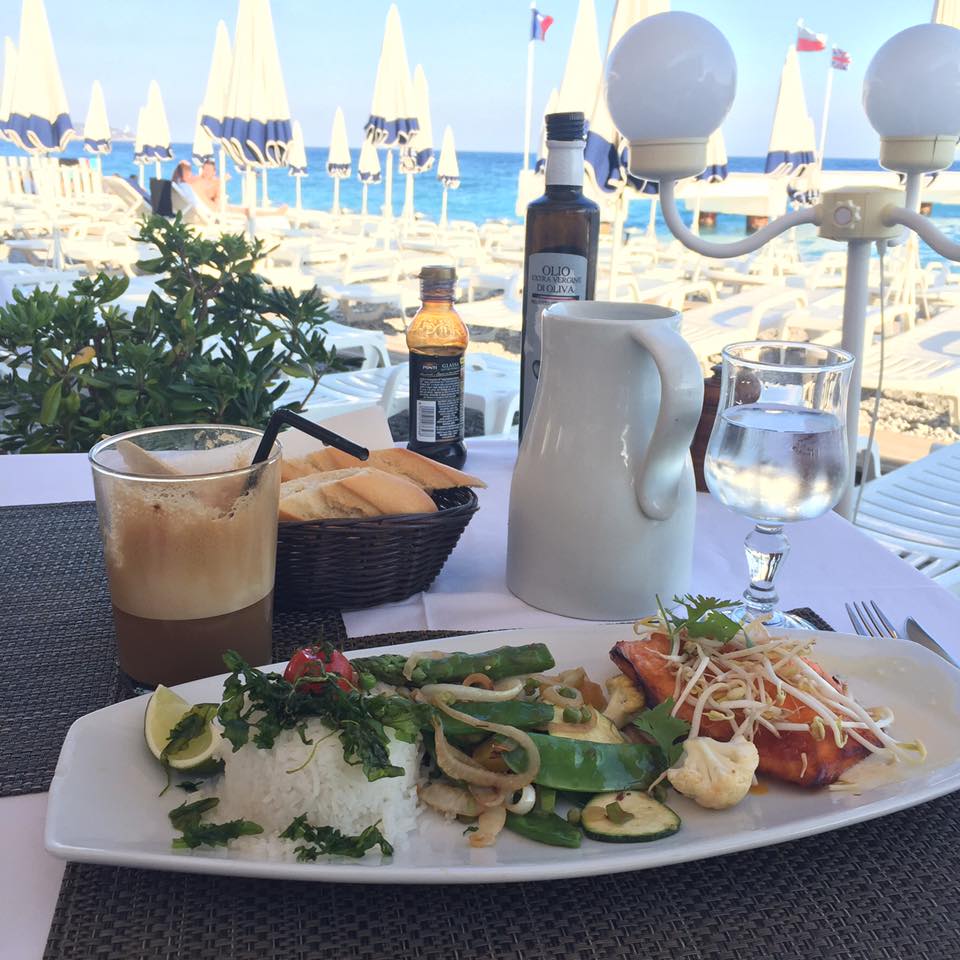 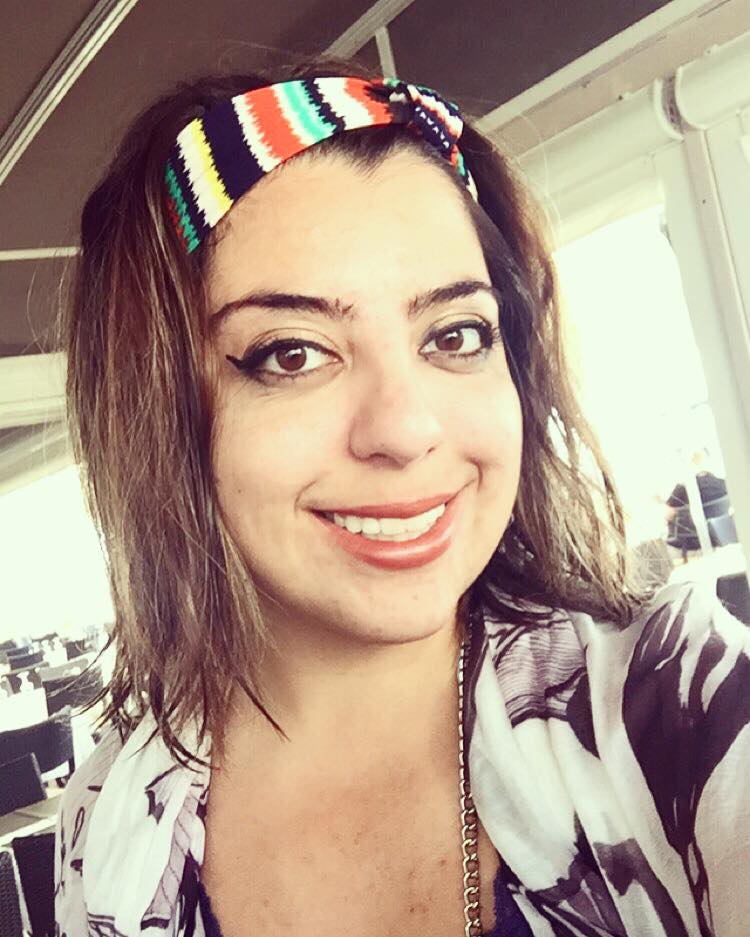 Bought and treated myself to a nice dinner at a restaurant that was right by the beach! It was delicious, I had a nice view of the water, and I had a frappe coffee. It was perfect, and a perfect splurge and treat to myself! I was in the south of France! I still couldn’t believe it! 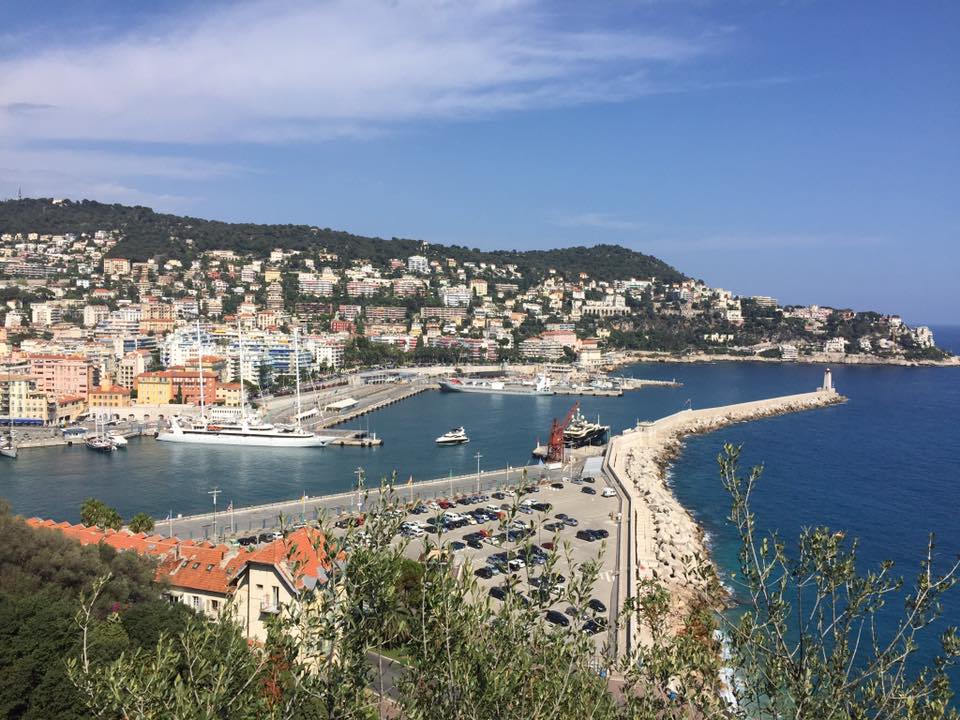 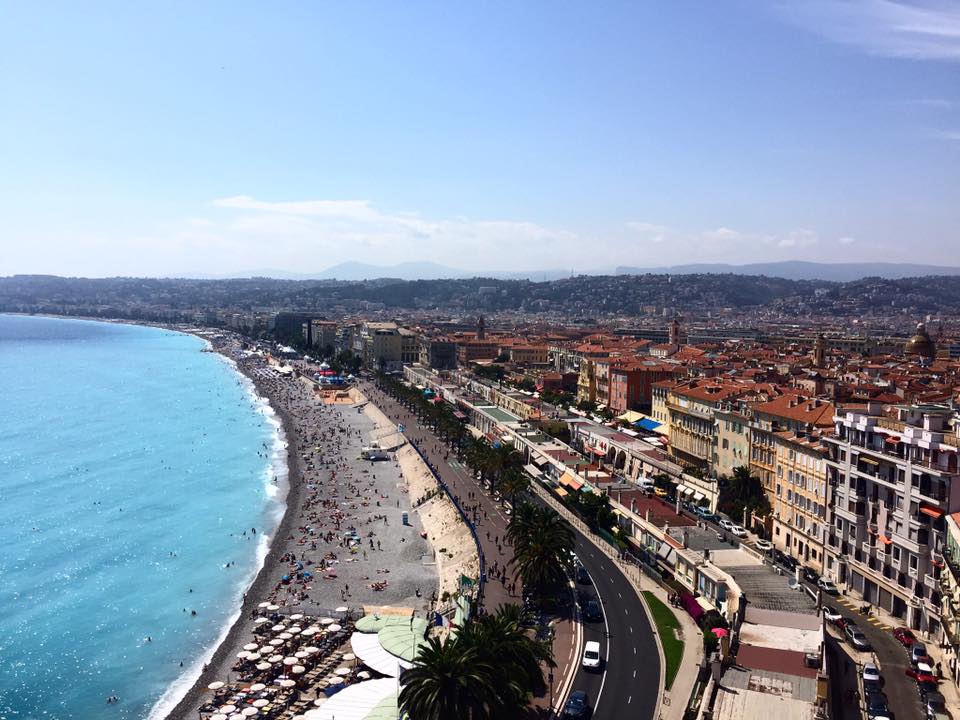 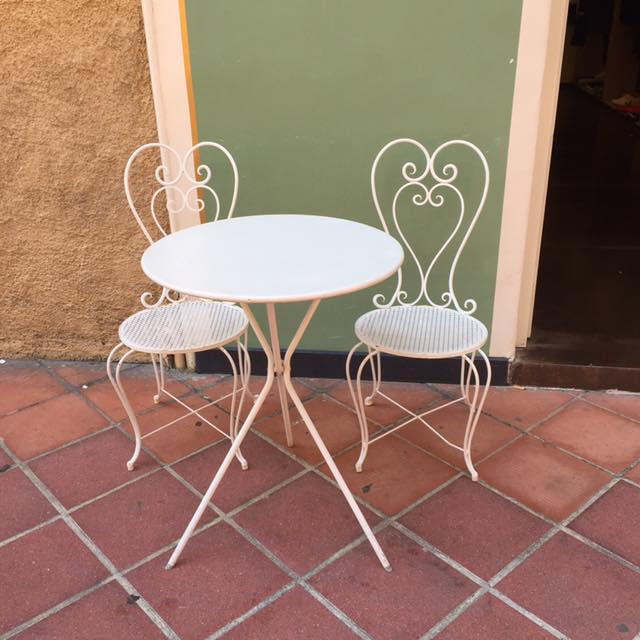 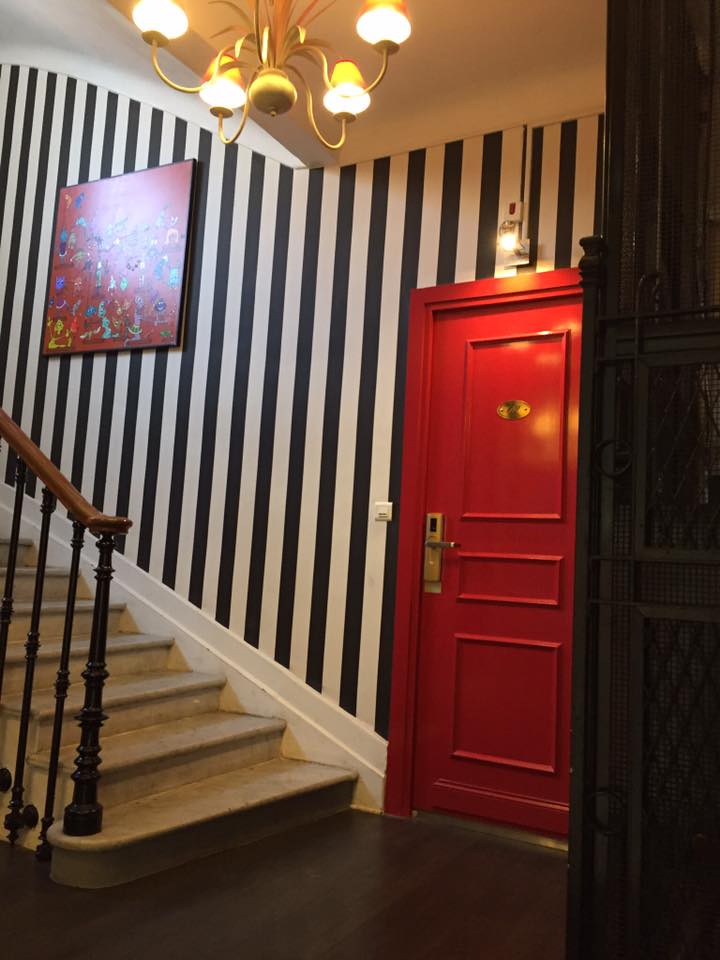 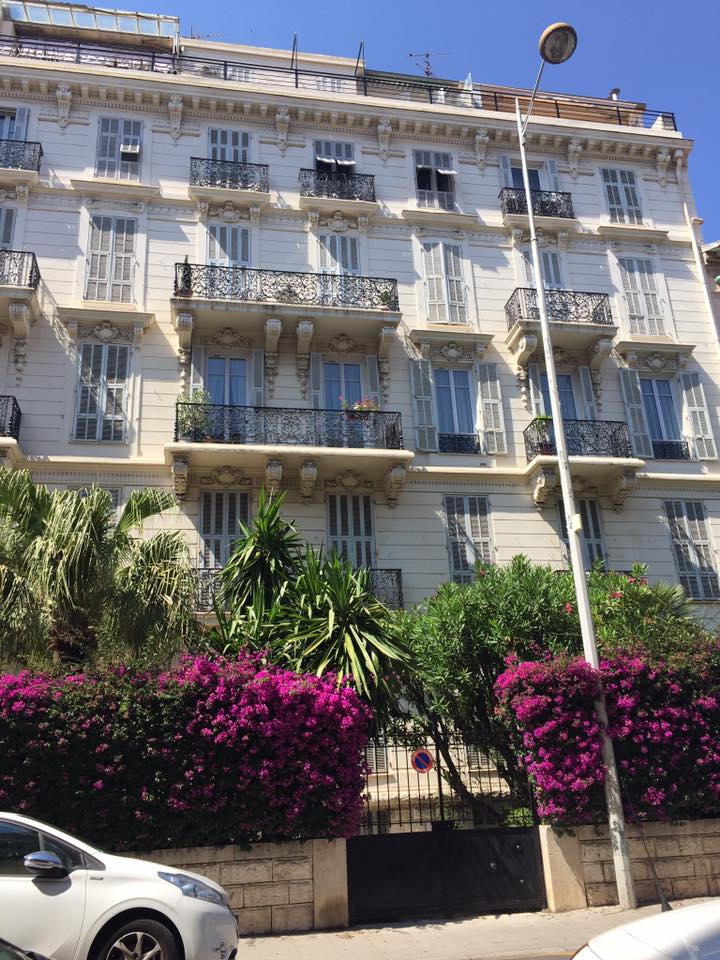 They don’t call it the Cote d’Azur for nothing! The water is so beautiful and blue, I was in awe. Breathtaking views all around, I was so mesmerized by this city. I always felt safe in the city, walking around by myself. I made sure I wasn’t out too late, and my hotel (seen above!) was pretty central… I did a good job at picking a hotel for the time there! It was a cute boutique hotel! I can tell you the name if you send me an email!
It was unfortunate because the week after I was in Nice, there was a terrorist attack of a man ramming a big truck into crowds that were gathered on the Promenade d’Anglais, in the same place where I had spent a lot of time walking around. Nice holds a nice place in my heart, so it was really scary to have something like that happen at a place that just seemed so safe.
Just goes to show you that its all about the luck of the draw!

I am so happy I went to Nice! It was a wonderful time. My friend flew in to Nice and we spent another night there, and then we rented a car (they gave us a BMW!) and we drove to Cannes, Sainte Maxime and Saint Tropez, which was BEAUTIFUL. It was like a dream come true. Everything about the south of France just felt so surreal, and I was just soo happy the entire time. I couldn’t believe where I was! I did it!
And Paris, Oh my, I fell in love! I have so many fond memories from my travels to France, I need to break up the cities into separate posts, so my next posts will feature St. Tropez and then Paris!
You can travel as a grad student, even if we don’t get paid much! With a little savings and smart planning, I was able to knock some cities off my bucket list! Traveling after a conference is the best thing you can do, especially if the flight is already paid for (and especially especially if the conference is international!!!).

Have you been to the South of France or Nice before? Do let me know what your experiences were. Have you been to an international conference in your field? Whats the best place you have gone for a conference? I’d love to know!!

PS. I am always posting on instagram, you can check out more photos by looking at my hashtag #phdfashionistatravels.